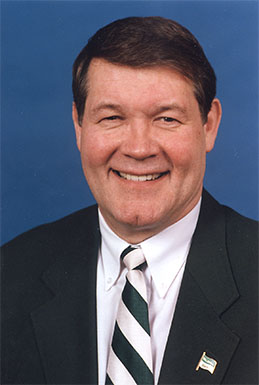 Daniel Duane Angel became the University’s seventeenth president on January 1, 2000. During his four-year tenure as president, the University added three new doctoral programs, strengthening the institution’s research role. Under his direction the "Campaign for National Prominence," raised a total of 83 million dollars. The campus was further enlarged with the construction of a student housing complex—Marshall Commons, which consists of Gibson, Wellman, Haymaker, and Willis Residence Halls, along with Harless Dining Hall. He also oversaw the construction of a 1,000-space parking garage across from the Henderson Center. He notified the Marshall Board of Governors in November 2004 that he would retire on December 31, 2004—he turned sixty-five on December 23. He also said that after taking a six-month sabbatical he would return and teach in the Fall of 2005, and that he planned to teach for a year-and-a half. He taught classes in the Department of Education until the Fall 2006 semester, after which he resigned on January 1, 2007, to accept the position of president at Golden Gate University.