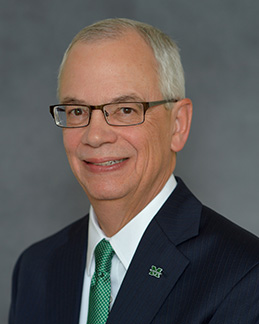 A Mississippi native with a background in biomedical engineering, President Gilbert previously served for nearly six years as provost and executive vice president of Mississippi State University. Before that, he was the university’s associate provost and associate vice president for academic affairs for six years. Earlier roles include head of the Department of Agricultural and Biological Engineering and coordinator for the biomedical engineering graduate program in the Bagley College of Engineering.

President Gilbert attained the rank of professor in 1993 after joining the Mississippi State faculty in 1988 as associate professor. From 1989-2005, he also served as adjunct clinical assistant professor of orthopaedic surgery (research) for the University of Mississippi Medical Center. He served for 10 years as a research affiliate with the Institute of Neurocognitive Science and Technology at Mississippi State, and was among the first class of Mississippi State’s honors faculty in the Shackouls Honors College.

In 2014, he was elected to the inaugural board of directors of the Association of Chief Academic Officers. A member of the College of Fellows of the American Institute for Medical and Biological Engineering, he also was inducted in the inaugural class of Fellows of the Institute of Biological Engineering, an organization for which he served as president in 2005.

Board of Governors Address