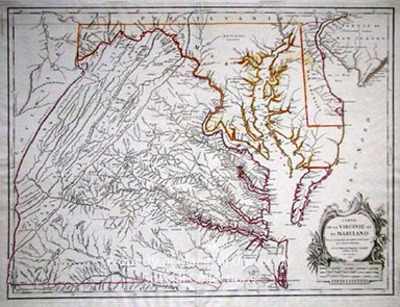 The late eighteenth century mapping of Virginia was dominated by Joshua Fry and Peter Jefferson’s A Map of the Inhabited Part of Virginia Containing the Whole Province of Maryland, 1751. Not for another forty years was another map maker to improve upon their work. Consequently the Fry and Jefferson map formed an important source for subsequent map-makers, as well as a number of direct derivatives, such as this map by the French map publishers the Vaugondy’s, published in 1755 and issued in the Atlas Universal. The rarity of the early Fry and Jefferson map made this the earliest obtainable map to accurately depict the interior of Virginia beyond the Tidewater.