A Map of the British and French Dominions in North America with Roads, Distances, Limits and Extend of the Settlements 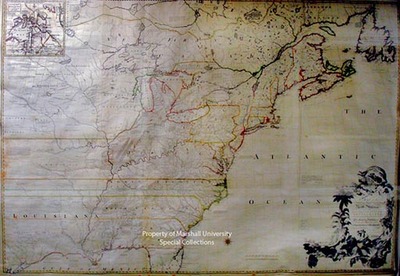 This is a large detailed map of North America from Newfoundland to the Gulf of Mexico, and west to the Missouri River. It is the earliest and best large scale survey of American and British colonies, and described by the authority, Colonel Martin of the library of Congress, as “Without serious doubt… the most important map in American history.” It was the only comprehensive map of the theater of war during the American Revolution and was the authoritative cartographical document referred to during the negotiations of peace in Paris in 1782 and 1783. Mitchell’s map was hung in the Halls of Congress in 1802. It was used for the purpose of determining land grants in the Ohio and Mississippi Valleys; received official status in the September 29, 1782, convention between the United States and Great Britain.