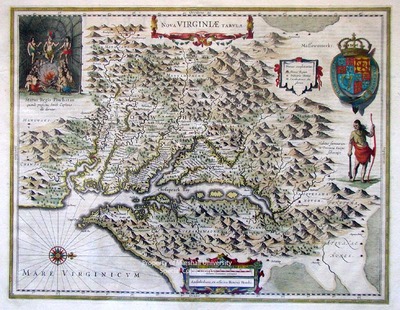 Henricus Hondius, a copy of John Smith's "Map of Virginia", 1612

The first permanent settlement in North America was at Jamestown on the James River, Virginia, in 1607. John Smith, one of the original settlers, explored the region and drew a map in 1612. This is an attractive example of Henricus Hondius' derivation of Smith's 1612 map. The map is based upon the 1618 map drawn by Henricus, the brother of Jodocus Hondius. This was one of the first maps engraved by Henricus for his Atlantis Appendix of 1630. Within the map also appears the British Royal Arms and vignettes depicting the interior of a native hut, entitled "Status Regius Powhatan,” and a full figure of an Indian warrior.