A Map of the British American Plantations Extending from Boston in New England to Georgia, including all the Back Settlements in the Respective provinces as Far as the Mississippi. 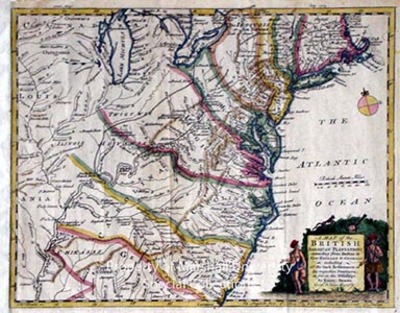 This is a small, but important map which influenced British perceptions of the Colonies until the Treaty of 1763. It shows 'Walker's Settlement 1750' on the Cumberland River. Emmanuel Bowen (ca. 1720-1767) was an engraver, print setter and publisher in London. He was appointed Engraver of Maps to both King George II of England and Louis XV of France. It was initially published in the London Magazine in 1749.