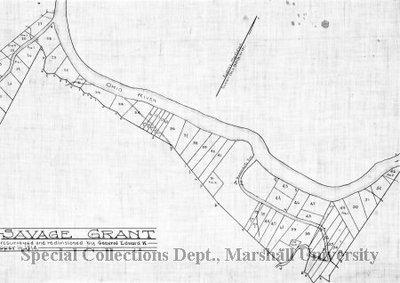 Based on their service during the French & Indian War, (1754 to 1763) Virginia Governor John Dunmore in 1772 by authority of King George, granted over 28,000 acres to Captain John Savage and 59 other soldiers. The original grant read 28,627 acres. Previous Governor Dinwiddie made the original proclamation. The boundary ran along the Virginia, now West Virginia side of the Ohio River, beginning at Catletts Creek (now Catlettsburg, Kentucky) past the mouth of Big Sandy River up that river to Forks of Big Sandy (near present-day Fort Gay, West Virginia and Louisa, Kentucky) and included land on both sides of the Big Sandy. From mouth of Big Sandy grant continued up the Ohio River, passing mouth of Guyandotte River almost to Greenbottom. Savage never settled on his land, nor did most of the other soldiers. Many of them sold their land, others lost their grant because they did not make the required improvements to their property, and a few forfeited their grant for non-payment of taxes. In the late 1700’s and early 1800’s there were numerous boundary disputes. This was a result of a meeting of some of the grantees on the land in 1775, when they attempted to divide the tracts. When legal entanglements arose between some of the grantees or their heirs, a suit was brought before the chancery court at Staunton, Va. Staunton was the county seat of Augusta County which covered all the way to the Ohio River. The court empanelled a 5-member commission to divide and evaluate the land given in the grant. The commission hired Edward Tupper to conduct the survey. Tupper completed his work in 1814. He divided the grant into 61 parcels of approximately 460 acres each, with Lot No. 1 at Louisa, Ky and ending with lot 61 near the Guyandotte River mouth. Lot 33 lies partly in Wayne County and part in Cabell County. In 1819 the court upheld the partitioning of the Savage Grant. This area now contains the cities of Huntington, Kenova, Ceredo, and Guyandotte.